In the mist
The concrete tower blocks
Rise like shimmered giants
Grotesques with softened edges
Shifting in the curls.

In the mist
Dogs appear wraith-like in the park
Spectral hounds
With imagined jaws
Dripping in the whorls.

In the mist
A train rumbles and glides
Like a dragon of old
Headlight eyes blaze
Snorting in the coils.

In the mist
Crowds assemble like ghosts
And vanish, forming shapes
Like clouds and smoke
Shrouded in the eddies.

In the mist
There are two cities
One real, one on the eye’s edge
In the half-seen corners
Shadows in the swirls.
Posted by James at 14:00 No comments:

Apologies for the blogpost that went missing over the weekend. I've had a strange couple of days with genuine mood swings, going from feeling absolutely fine, to being grumpy, tired, and exhausted, then suddenly back to happy and energetic again! Very strange. My wife thinks that I'm displaying pregnancy symptoms, which may be possible. Extreme cases even have a diagnosis: Couvade.
Whatever the reasons, here's a poem:

Raging hormones
Up and down
Happy and mellow
To a grump
With a frown
But my wife
Has the bump
It's not me
I'm just the husband
Pregnant
In sympathy.
Posted by James at 14:00 No comments:


With so many distractions these days, it’s often hard to really let your mind drift, but a lot of good writing should be about letting your imagination run freely, I think. Whatever the type of story you are writing, whether it is based in a mythical country or somewhere closer to home, or perhaps even fact based, the writing still has to have some imagination to it to avoid clichés and to make it readable.
I personally find it very difficult to let my mind go. There’s always something else in my mind battling for attention, whether it be the fact that I have to make food for work tomorrow, or do the dishes, or more often lately, spend time considering what baby items I should be buying.
It also doesn’t help having a one room flat where you have no real space to yourself.
My imagination can let go sometimes though, usually when I go out for a walk, and perhaps the fresh air helps a bit too. I also think that having broader horizons to look at in reality help to broaden the horizons of your creative thinking. Either way, this is when my brain runs at its most free.
The trouble is when you’re out walking it’s not so easy to take notes about the things that you come up with, or at least to be able to take a break for a moment to write things down. I’m usually off to work or taking a trip to the shops anyway. [Reading this back it makes it sound like I have a very hectic life – I don’t!]
Anyway, what I am really trying to say is that the toughest things about writing are both finding the time to physically sit down and do it, but mostly it’s finding the time and space to come up with new ideas and different ways of telling old ones. I’d be grateful for any hints and tips that people have for doing this in the city.
Posted by James at 14:00 No comments:

Email ThisBlogThis!Share to TwitterShare to FacebookShare to Pinterest
Labels: Writing


The most recent wildlife series on the BBC to be presented by David Attenborough whose enthusiasm seems to increase, if that’s possible, for the natural world around us. The series travelled to different areas of Africa for each episode and has been fascinating to watch, and at times incredibly moving. It’s hard not to be amazed by the natural beauty within our world, and Africa’s diverse ecology seems to encapsulate it all. As such this has been one of the best nature series for a while.
Episode one in the Kalahari featured the ever popular meerkats, but also a fascinating battle between two giraffes who swung their long necks at each other like giants battling with tree trunks. Episode two hit the Savannah with bizarre looking birds, lizards stealing flies from the faces of lions, but also the most harrowing moment of the whole series with the death of a baby elephant.
This was an incredibly sad scene, but it made no sense that people complained about the BBC doing nothing to help. They are there to film nature as it is, not to intervene. Perhaps those people who complained should reconsider their consumerist lifestyle that has led to climate change and their own role in the changing weather patterns of Africa.
Episode three in the Congo was an eye opener as personally I never realised that Africa had tropical rainforest, although logically it makes complete sense. Here we saw honey eating chimps and a wonderful night time rhinoceros meet, which showed one of the most hilarious scenes; a male trying to woo a female with some extra antlers attached to his horns!
The fourth episode at the Cape showed scenes reminiscent of Blue Planet, with a feeding frenzy for birds and dolphins, but also a curious migration from some huge fish. And then there was episode five in the Sahara with some incredible ants who can survive the midday temperatures and also the footage of moving sand dunes which took about two years to create.
Before I move to the final episode I’d like to mention the music, which as usual for the BBC was excellent, but I wonder if there was a little too much of it. I’m not sure that something akin to Ennio Morricone was needed for the giraffe fight or any of the other music which told us how to feel. Somehow it felt like it was trivialising the scenes which stand out for themselves I think. Either that or it was like A-Level media students trying to look clever by editing wildlife scenes to match some music.
Now to the final episode which I thought was easily the best, probably because it featured more of David himself interacting with the animals and dealt with the future and the need for conservation. It’s fantastic that there is so much work going on in Africa to try to protect the most vulnerable animals, such as the elephants, lions, rhinoceros and sea turtles. And it proves that whatever we want to do from here in the west, it is impossible without the complete assistance of the locals as they know their animals and environment best.
Overall this was an amazing series and would thoroughly recommend it to anyone who has not yet seen it, especially if you like animal series. And I challenge anyone not to be moved by the sight of a blind baby rhino squeaking!
Posted by James at 14:00 No comments:

Email ThisBlogThis!Share to TwitterShare to FacebookShare to Pinterest
Labels: Review

If you're alone this Valentine's, or indeed during any other season, don't worry, you never know what's just around the corner:

Love can spring forth, like bluebells in March
Love can appear from an empty sky, like a summer shower
Love can fall from above, like autumn leaves
Love can be hibernating, in winter's coldest hour.
Posted by James at 14:00 No comments:


We had the first of our antenatal classes last night; something that I was dreading. I’ve always struggled with these types of group learning, whether it be school, University, evening creative writing classes or work training sessions. Being within a group of people who I don’t know (and are therefore unable to trust) is just one of them. But it’s also the pressure you often feel to have to say something important.
I’ve never been the most vocal of people, or at least not instantly. I like to think about things carefully, go over all the pros and cons and more often than not come down somewhere right in the middle of any argument. So, when people ask what I think, or whether I have anything more to contribute, I rarely have anything to say, usually because it’s already been said by someone else, but also because I’m still unsure.
Having gone there with deep reservations I found that it wasn’t quite as bad as I was thinking. No more participation was required than you wanted to give, and of course I had my wife’s hand to hold. The other factor was that most of the information is directed towards the mother anyway and so the focus is somewhat away from me.
The demographics were fascinating to me though, and I think an antenatal class can tell you a lot about an area. There were six couples, all of whom were married, and two single women. Of the couples, none were a White British pairing and neither of the single women was British either.
That there are multiracial and multinational couples in London is not too much of a surprise, but the fact that all the couples were married was a big surprise to me. Marriage is making some kind of a comeback at the moment, and for many reasons the ideals of marriage are a big news item too.
As a natural cynic I can’t help thinking that most people are getting married because they like the idea of a big showpiece occasion rather than thinking about the years and decades that come after. But perhaps I’m wrong.
Perhaps in a world where things change so quickly and so dramatically, where information is available at the drop of a hat, where progression and year on year improvement is the ultimate desire, this world that is now incredibly unreliable and scary is making people latch on to something can give them constancy. And whether you are two men, two women or a man and a woman, what else can give you that social constancy as a marriage?
It’s a somewhat romantic thought I guess, but I’d love to look at data correlating number of marriages with social upheaval.
Any thoughts?

I’ve been writing more poems lately since starting up my new blog. It’s helped to have a bit more of an outlet. I’m thinking of sending some out into competitions too, not that I’ve ever done that well with them in the past, but it’s pointless to give up. Of course Valentine’s Day always provides a poem requirement, and I think my wife was satisfied with this year’s effort. I was too in fact.
Posted by James at 14:00 No comments:

Email ThisBlogThis!Share to TwitterShare to FacebookShare to Pinterest
Labels: Diary

A word which means so much to those who hear
Their names affectionately twined with it
For they know that it's opposite is fear
Of loneliness, when age and illness hit

For love is all you need they sometimes say
Though sometimes too it burns, or scars for life
But what else in this world keeps war at bay?
It's opposite; which keeps us all from strife

What can you lose, if not yourself, in love?
To be at peace, and flying like a dove
Posted by James at 14:00 No comments:

Squirrel At The Window 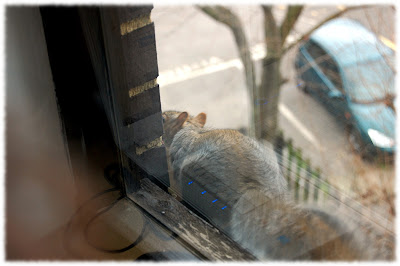 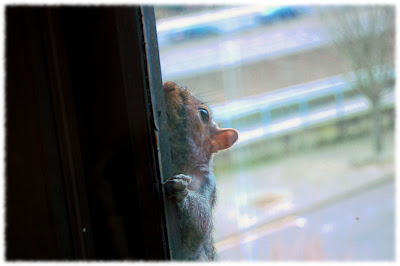